Editor’s Note: I happen to agree. I never trusted him. – oz 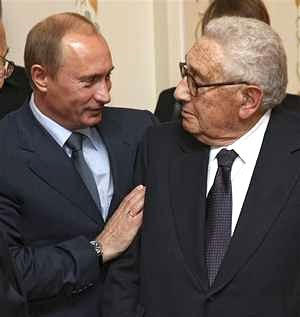 As it becomes increasingly clear the West is controlled by
Cabalist Satanists, our hopes increasingly rest on Russia’s Putin
who, in contrast, seems like the paragon of sanity and goodness.
He thwarted the Zionist takeover of Syria and destroyed
the barbaric Zionist proxy, ISIS.  However, Andy Sloan points to evidence
that this is all a deception and that Russia (and China) plan to
attack and conquer the West. I think this scenario is farfetched.
Why socially engineer us if they plan to exterminate? Nevertheless
Putin’s bona fides need to be scrutinized carefully.
Makow: Didn’t Aristotle say somewhere that an enlightened man can entertain contradictory ideas and reserve judgment until he has conclusive evidence?
“When lies have been accepted for some time, the truth always astounds with an air of novelty.” — St. Clement of Alexandria
Andy Sloan is a management consultant and traditional Catholic from England. He believes ‘all history is theology.’
by Andy Sloan
(henrymakow.com)
The perception that Vladimir Putin is a good/Christian man is common in the West, even so for the majority of truthers. His periodic moral overtures and seeming Christian convictions give consolation in lament of the almost universal moral decay of our leaders; the deep contrast serving to magnify his esteem. 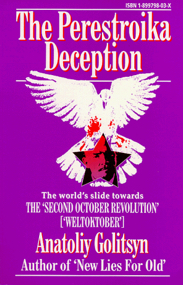 However, as we will demonstrate this rosy perception of Putin is a deception which closes the gate of understanding for most to the reality that Russia is in fact still communist and as most prominently revealed by defector Anatoliy Golitsyn (but also other defectors, notably Col. Stanislav Lunev, Sergei Tretyakov, Jan Sejna and Victor Suvarov) is in the final phase of a multi-generational deception strategy, in ultimate objective of military conquest of the West. (1)

We must remove Putin’s mask and ironically, we can employ the wisdom of Sacred Scripture in aid of easily proving that Putin is, in fact, the very contrary to a Christian and indeed a first-grade antichrist.

Matthew 7:15-16
“Beware of false prophets, who come to you in the clothing of sheep, but inwardly they are ravening wolves. By their fruits you shall know them.”
1) Putin signs law banning evangelism outside of churches – July 2016. (2)

“The most draconian anti-religion bill to be proposed in Russia since Nikita Khrushchev promised to eliminate Christianity in the Soviet Union.”

Quote from an open letter signed by Protestant Churches of Russia.

“This new situation resembles the Soviet Union in 1929. At that time, confession of faith was permitted only in church,”

“All power is given to me in heaven and on earth. Going therefore, teach ye all nations; baptizing them in the name of the Father, and of the Son, and of the Holy Ghost.”

This instruction is from God and therefore above all human law and thus Putin is incriminated in fundamental rebellion against Jesus Christ, in denying the promulgation of His gospel of salvation.

Who was Felix Dzerzhinsky? The head of the Cheka secret police (the precursor to the KGB) which was responsible for the horrific torture and mass execution of tens of thousands during the Red Terror and Civil Wars (1918-21). As recorded in the journal Novaia Zhizn in 1918, Dzerzhinsky said “We stand for organized terror‘. The late Soviet analyst Mr. Christopher Story described him as ‘one of the most evil men ever to have lived’.

In 2005, Putin restored to the inner courtyard of the Moscow Police Headquarters, the Dzerzhinsky bust that had been removed on 22 Aug 1991 during the ‘collapse of communism’. In 2014, Putin restored the title of ‘Dzerzhinsky Division’ to an elite police unit and also erected a miniature statue of Dzerzhinsky in Lubyanka Square, at the exact location of the ‘Iron Felix’ original, that had also been removed. (3)

So what do we make of Putin’s rehabilitation of Dzerzhinsky? Sacred Scripture informs;
Proverbs 28:4

“They that forsake the law, praise the wicked man: they that keep it, are incensed against him.”

Hence, Putin is revealed not only as evil, but acutely so, as deduced from his exaltation of Dzerzhinsky, who was a man of hideous criminality!
3) The testimonies of Mrs. Anna Politkovskaya & Mr David Satter. 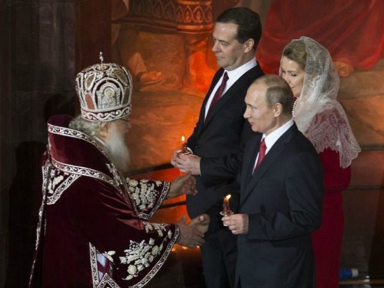 In further evidence of his sham Christianity, we have the record of the murdered journalist Anna Politkovskaya (4);

“Putin was even revealed to the people at Easter instead of the Risen Christ. At the beginning of the Great Matins service there stood, shoulder to shoulder with Putin as if at a military parade, Prime Minister Fradkov and Dmitry Medvedev, the Kremlin’s new éminence grise, head of the president’s office, a man of diminutive stature with a large head. The three men clumsily and clownishly crossed themselves, Medvedev making his crosses by touching his hands to his forehead and then to his genitals. It was risible. Medvedev followed Putin in shaking the patriarch’s hand as if he were one of their comrades, rather than kissing it as prescribed by church ritual. The patriarch overlooked the error. After midnight the Orthodox faithful taking part in the procession await the opening of the church doors. The patriarch stands on the steps at their head and is the first to enter the empty temple where the Resurrection of Christ has already occurred. When the patriarch had recited the first prayer at the doors of the temple, they were thrown open to reveal Putin, our modest president, shoulder to shoulder with Fradkov, Medvedev, and Luzhkov.”

And in general indication of Putin’s personal corruption, the book of Mr. David Satter – ‘The Less You Know, the Better You Sleep: Russia’s Road to Terror and Dictatorship Under Yeltsin and Putin‘ (5) received the following accolades;

“Vladimir Putin’s dictatorship was enabled by those who ignored the lessons of history and the warnings of people like David Satter, who was right early and often during the fall of Russian democracy and the rise of Putin’s police state.”

“David Satter blends masterful journalism and rigorous scholarship in a disturbingly illuminating book on the origins, nature and future of the Putin autocracy. Required reading for all those who refuse to indulge in wishful thinking about a rogue state claiming to be a respectable superpower”

Romanian born Professor Vladimir Tismaneanu, author of ‘The Devil in History: Communism, Fascism and Some Lessons of the Twentieth Century’. Mr. Satter was expelled from Russia in 2013.

In a final defense of Putin, some might present his statement of December 2013: “Many Euro-Atlantic countries have moved away from their roots, including Christian values. Policies are being pursued that place on the same level a multi-child family and a same-sex partnership, a faith in God and a belief in Satan. This is the path to degradation.“

and other apparently religious statements as well as his denunciations regarding various crimes of the West. However, taking perspective from his virulently anti-Christian actions as above, we find further understanding of Sacred Scripture;

“For such false apostles are deceitful workmen, transforming themselves into the apostles of Christ. And no wonder: for Satan himself transformeth himself into an angel of light. Therefore it is no great thing if his ministers be transformed as the ministers of justice.”

We can, therefore, conclude by Putin’s ‘fruits’ that his image as a Christian and moral individual is false. And in wider perspective, his dissimulation finds coherence within Soviet strategy as exposed by Mr. Golitsyn;

“..greater apparent official tolerance of religion in the Soviet Union is accompanied by a secret drive to increase Party and KGB penetration of the Catholic and other churches and to use agents therein for political and strategic purposes inside and outside the Soviet Union. As part of the program to destroy religion from within, the KGB, in the late 1950s, started sending dedicated young Communists to ecclesiastical academies and seminaries to train them as future church leaders. These young Communists joined the Church, not at the call of their consciences to serve God, but at the call of the Communist Party in order to serve that Party and to implement its general line in the struggle against religion. When these new ‘church leaders’ have achieved their goals, then a mass withdrawal of these agents will occur to disrupt and destroy the churches. Never in its history, since Nero has Christianity faced such a threat of possible destruction.”  The Perestroika Deception (Pages 116-117)

The world urgently needs to be undeceived regarding both Putin and Russia.

In PART 2, we will give context to this deception in contrivance of WW3, which in the aftermath will provide the justification to create a One World Government/New World Order;

“The drive of the Rockefellers and their allies is to create a one-world government combining supercapitalism and communism under the same tent, all under their control. Do I mean conspiracy? Yes, I do. I am convinced there is such a plot, international in scope, generations old in planning, and incredibly evil in intent.” —Congressman Larry P. McDonald, 1976. From his introduction to Gary Allen’s book ‘The Rockefeller File”

He was killed in the Korean Airlines 747 that was shot down by the Soviets in 1983.

Related- “When I was interviewing the Russian military intelligence defector Stanislav Lunev in 1998, journalist Christopher Ruddy asked him what was the most decisive factor in determining the outcome of a future war. Lunev said it was surprise. Let us be perfectly clear: the Russians plan to strike first.”  http://jrnyquist.com/strategic-significance.html

———Putin passport states he is Jewish

“We are moving toward a new world, the world of Communism. We shall never turn off that road.”

(1) Anatoliy Golitsyn and the Perestroika Deception.

(5) Mr. David Satter – ‘The Less You Know, the Better You Sleep: Russia’s Road to Terror and Dictatorship Under Yeltsin and Putin‘. https://georgepwood.com/2016/07/13/review-of-the-less-you-know-the-better-you-sleep-by-david-satter/

← New Vaccines Will Permanently Alter Your DNA = PURE MADNESS coming to a doctor near you
Criminologist estimates as many as 2,000 serial murderers wandering the streets of the US →